Many questions surrounding the 150 dollar laptop

Medison, a small Swedish PC company, claims they will sell a basic Linux-based laptop for only 150 US dollars. But the company has been called in question in blogs, forums, and news articles, because the computer shown on the company’s web site seems very similar to a laptop from another producer. Two days ago Medison met the Swedish press to straighten things out.

Medison did not exactly strengthen its credibility during the press conference held Wednesday evening. Admittedly, the company representatives showed the computer in front of ten journalists, but they would still not reveal the name of the producer.

Medison’s managing director, Valdi Ivancic, received repeated questions as to who is actually going to manufacture the computer.

”Medison has a partnership with a manufacturer with whom I was in contact with as recently as last night. We have decided not to reveal which company it is, because it could damage their relationships with other companies. It has been said that it could ruin the market for part of our competition." 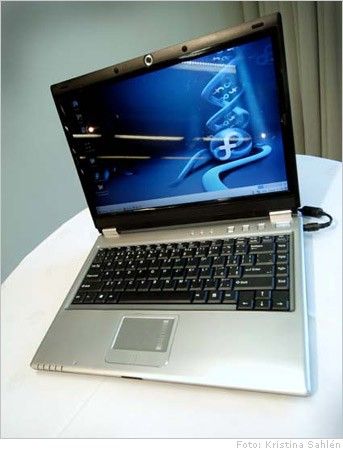 This is the laptop that is going to cost 150 US dollars, according to Medison.

The notebook computer shown on the company’s web site, and which was presented at the press conference, has been said to be identical to a product from the Taiwanese supplier Clevo. To this Valdi Ivancic answers:
”We use standard components, so it may look like they have the same specifications. There are certainly several others that are similar.”

Ivancic sticks to his previous promise that the first computers will be delivered around August 15. According to Ivancic they have received thousands of orders.

In order to defend himself against accusations of fraud, he leans on the established American online retailer, 2Checkout, which has promised that no money will be withdrawn from the customer’s account before a product has been shipped. The money remains in every individual’s account; it has been reserved, but no money has been withdrawn.
”Worried customers are welcome to cancel their orders", Ivancic said during the press conference.

Three of the five owners met with the journalists at the press conference, which was over two hours long, at the Hilton Hotel in Stockholm.
In addition to Valdi Ivancic, there was the Scandinavian boss, Robert Klanjac, and the sales manager, Per Söderberg. Ivancic owns 90 percent of the company, while the other four owners have the remaining 10 percent. The only capital in the company is that which they ventured themselves, which, according to Ivancic, is "small change".

Some questions were answered during the evening. For example it was revealed that shipping is not included in the 150 dollar price of the computer, which had previously been stated.
Valdi Ivancic could not, however, say how the shipping charges will be handled without first consulting the company's logistics partner.

Medison’s owners also revealed that they do not see the computers as their most important source of income. Instead the big money will come from advertisements on the web site, ads which the company will sell to suppliers of accessories and auxiliary equipment.
”It is easier for the customer to find the accessories directly on our site. We have had discussions with several possible partners, which would pay a monthly fee.”

Ivancic mentioned that the advertisements could cost anywhere between 15 000 dollars and almost three millon dollars.

How many computers do you have to sell to satisfy the advertisers?
”We have made a calculation. Our partners do their analyses. But this is something that our sales manager discusses with our partners.”

Will you sink or swim with this?
“No we won’t.”

When it comes to customer support, Valdi Ivancic says they are discussing a partnership with Infocare, but no deal has been signed.

Medison also has plans when it comes to the assembly and production facilities. According to Ivancic, the company has an assembly facility in Brazil together with two Brazilian companies. It also plans new assembly facilities in Central America and Europe, including Sweden.

At the end of the press conference Valdi Ivancic, who used to be a local politician, received questions about his political ambitions.
“I have considered declaring my candidacy for Prime Minister. As an independent.”
When?
”When I have permission from my ‘government’, my wife and my daughter. It sounds strange and ambitious, but nothing is impossible”, he said.

RELATED STORY:
Medison's founder: "I want to be Prime Minister"